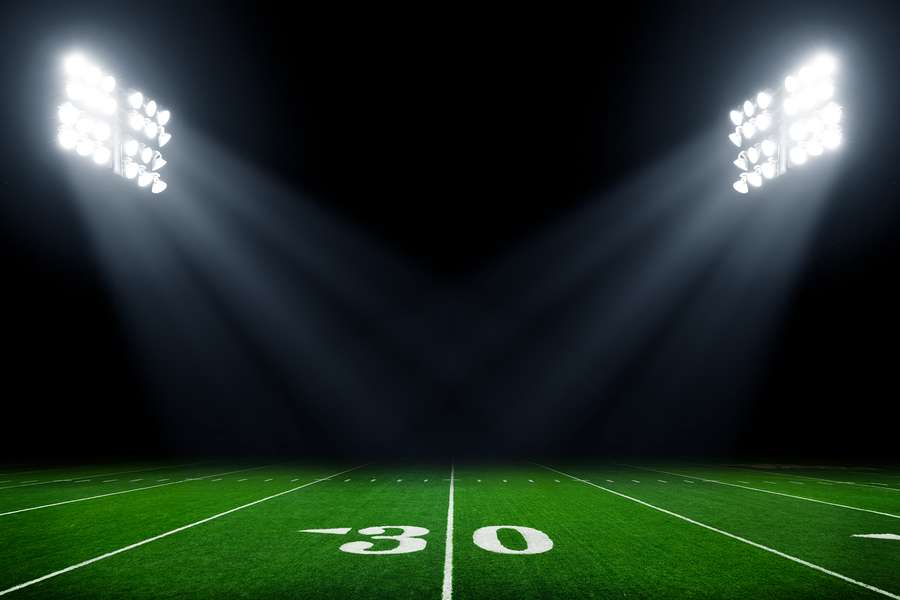 Las Vegas is making headlines this year for something more than the usual new casino opening. The locals are talking about winning the Super Bowl in 2021! That’s right. Las Vegas is soon to be the new home to the Las Vegas Raiders NFL football team.

Las Vegas has been seeking to add major league sports to its portfolio for some time. Recently, it welcomed an NHL expansion franchise, the Vegas Golden Knights.  And, now, the National Football League has officially approved the relocation of the Oakland Raiders franchise to Sin City. The former Oakland Raiders are moving to Nevada and will build a state-of-the-art stadium to showcase the team and bring more than excitement to a now vacant location not far from the Las Vegas Strip.

The Las Vegas Stadium authority recently approved a 30 year lease for the stadium at the planned location which was recently sold at $77.5 million for this project. Once NFL owners sign off, this decision clears the way for construction on the $1.9 billion dollar project to begin, to the relief of the builders and local construction worker unions who were eagerly awaiting the deal.

But, though this is an exciting time for the city, the team’s arrival poses some logistics challenges to its new home town that have to be worked out before the new stadium gets underway. From Allsite’s perspective as a vendor who works closely with construction firms and municipalities facing similar logistical and permitting challenges, we thought it would be interesting to summarize some of the issues this momentous move and great opportunity have raised.

The new Las Vegas Raiders stadium, which is set to be completed and ready for the 2020 football season, is a welcome addition to the already exciting urban Las Vegas landscape. Anticipated by local fans, tourists, developers and of course the tax authority, the new stadium will inject significant revenues into the local economy and add one more reason for tourists to come to Las Vegas. Southern Californians alone will comprise thousands of fans on game weekends during NFL season.

The proposed 65,000 seat sports facility is set to be built on what was state-owned land adjacent to the Strip and was released for use by nearby University of Nevada Las Vegas (UNLV). A very central location in the tourist corridor, the area surrounding the new stadium is a short distance from McCarran International, the region’s major airport, and adjacent to developed areas that feature high end casinos, shopping and UNLV facilities. Its central location along Interstate 15 means quick accessibility for incoming traffic from California, but also the potential for a traffic bottleneck. The area is understandably already subject to lots of traffic – both road and air.  A huge development like the Las Vegas Raiders stadium poses concerns for entities in and around the newly purchased stadium site. It is of special concern to those who operate McCarran International Airport. 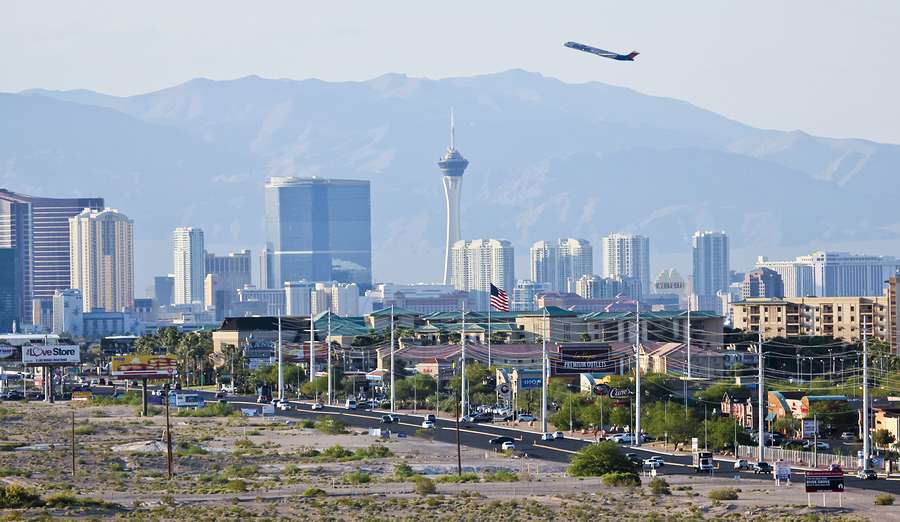 Las Vegas is at its heart still a small town. This is evident to anyone arriving by air at McCarran International Airport, which is located virtually blocks from the south end of the Las Vegas Strip. Built in 1942, the airport’s now central location dates back to the days when Las Vegas was mostly rural and gambling was done in the old “Downtown” Las Vegas (about 5 miles north of the airport). The Las Vegas Strip, which runs for several miles south of Downtown, was still virtually just empty desert when the airport opened. Times have changed and the highly developed Strip now reaches very close to the airport, which has grown exponentially in both services and traffic, handling over 47 million passengers in 2016.

In this environment, the National Business Aviation Association (NBAA) has expressed its concerns about the proximity of the stadium, only 1 mile away from the busy airport. Their concern is that the stadium is going to cause major traffic congestion as well as aviation operations issues.  Although the FAA’s assessment has determined that the new structure will not disturb airport operations, the NBAA Access Committee feels that planned approaches to certain runways have not been taken into consideration and will be impacted. For example, NBAA Access Committee member Keith Gordon fears that parking and stadium lights, and even game-night laser light shows, could pose a hazard to aircraft approaching or leaving the nearby airport.

Nevada Department of Transportation (NDOT) officials are also scrambling to help deliver the infrastructure portion of the stadium project by the June 2020 deadline, which is just 2 months before pre-season NFL games are scheduled to be played. NDOT has had to re-prioritize almost $900 million worth of existing projects to meet the needs of the stadium and get the job done, changes that affect local construction firms and businesses who depend on NDOT projects. Projects to upgrade the adjacent I-15 freeway will be an important priority.

In addition, the project must undergo an FAA review, much like the new Los Angeles Rams stadium. That review took a year to complete and required the Rams to buy an almost 30-million-dollar radar system to compensate for the structure’s height.

People in the construction industry worry that the stadium completion schedule is quite ambitious, as other new NFL venues took this time to build and were not as complex as the Raiders’ new creation with an open-air dome, giant video board for tailgaters, an eternal flame for longtime Raiders owner Al Davis, and a wall of windows at one end that can open and close.

A main topic of discussion concerning the exciting addition of the Las Vegas Raiders to the area is where to park 65,000 football fans. Currently there are only 6,200 parking spots planned for the site, which is much less than most smaller NFL stadiums. The Raiders are currently doing a parking study to address the issues and are confident they will come up with a plan that works well for everyone. Consideration is currently being given to using nearby hotel-casino parking garages, but negotiations are still in the works. Renting of parking spots from area businesses that would be allocated as long term spots for stadium parking is also being discussed as a possible option.

Despite the challenges with the construction of the new stadium, the project is heading in a positive direction and is expected to be completed on schedule. This amazing state of the art stadium will be a jewel in the already magnificent Las Vegas skyline and the new NFL team is expected to bring even more attention to an area that already has a worldwide reputation for spectacular entertainment. 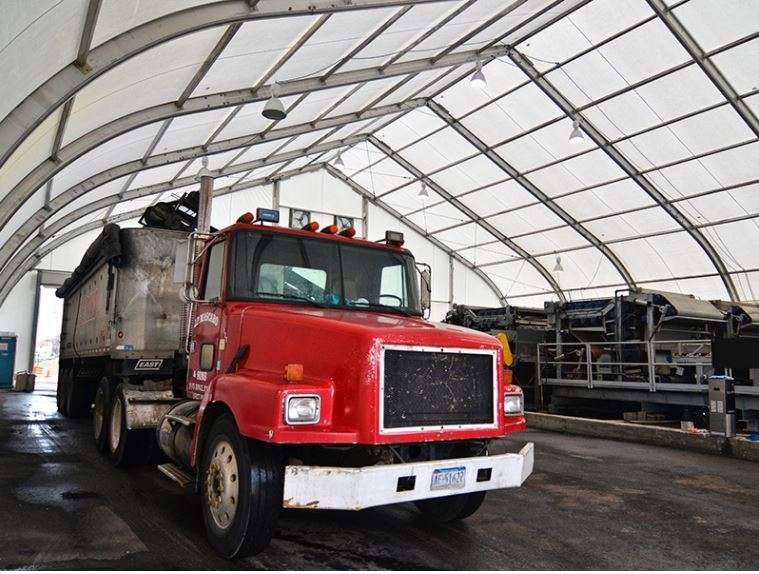 Allsite Structure Rentals serves the construction industry with shelter, workspace and storage solutions for temporary construction shelters. Construction companies use our structures to provide cover from inclement weather including rain and snow, helping projects come in on time and on budget. A wheel system can be added to our structures so that our structure can be removed without interfering with any construction that has taken place underneath the structure. Allsite’s tension fabric structure can also be used for storage of equipment and materials on construction sites, keeping everything quickly accessible for use and reducing costs due to theft and weather damage.

Sports teams, schools and colleges as well as recreational sports organizations turn to Allsite tension fabric structures for spacious, reliable and affordable temporary or permanent play space for a wide range of sports, including swimming, soccer, tennis and football.

Our tension fabric structures are also widely use in aviation as hangars or as maintenance (MRO) and fixed-base-operator (FBO) work facilities at and near airports worldwide. Our high quality tension fabric building’s advanced open-span design uses high grade aluminum and proprietary PVC fabric to create durable, reliable structures that provide well-lit, climatized and versatile space for almost any need. Give Allsite a call for any of your temporary or permanent clear span building needs.