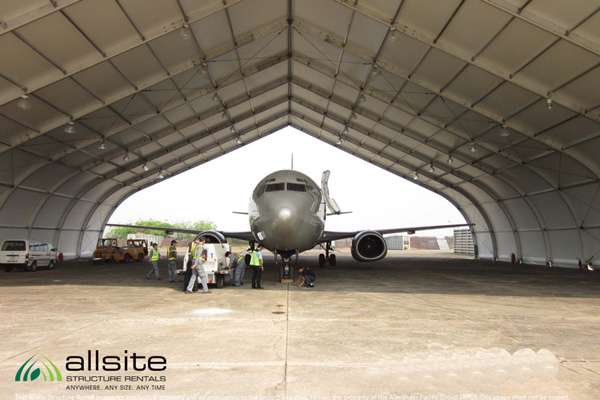 The Military’s Surprising New Use for a Temporary Hangar

From commercial airlines and government agencies to privately-owned flight enthusiasts, many have opted to use a temporary hangar as a simple way to properly care for, store, and maintain aircrafts, helicopters, and related equipment.

Using a temporary hangar is a cost-effective way to protect your investment and extend both its exterior appearance and functionality.

From our article, How Temporary Airplane Hangars Can Solve Space and Construction Problems. Click here to read the complete article.

One of the major defense contractors here in the U.S. is in the process of opening an unmanned aircraft training academy located in North Dakota.

In this particular case, the temporary hangar was used as a barrier to protect assets from the elements. They also offer an excellent source of privacy, and can be used for impromptu projects of all kinds.

As demand for crew and pilots has continued to increase, drone pilot training has been on the rise as a fast, effective way to provide manpower (or machine power, as the case may be) to the rising industry.

Because the project needs to be scaled quickly, and may grow or relocate in the near future, temporary hangars provide a perfect solution.

Launched by a California-based company that manufactures Predator and Reaper drones, the temporary hangar they will be using for this new project is estimated to be nearly 19,000 square feet. The temporary hangar will house over 100 students in training to control unmanned drones this year.

Why was a temporary hangar selected?

A temporary hangar is ideal for new projects such as these, as it provides much-needed flexibility and scalability. It’s also enabled the project to be implemented quickly and without a lot of the complication and expense that goes into permanent structures, which might need to be further expanded in the future.

If the test program does not have lift-off or the project is relocated, a temporary hangar can be used for many other government functions, from storage to shelter to other forms of training. In that sense, the probability of a financial loss is very low.

What type of temporary hangar is right for this project?

Finding the right temporary hangar for each project is essential, as many may be limited in size, scope, and durability.

While many considerations go into choosing the right temporary hangar for each project, there are a few key indicators that would be helpful for a project of this size and scope.

Generally speaking, military projects that require a temporary hangar call for the following:

What other ways could a temporary hangar be used in a military setting?

There are many uses, some of which we may not be aware. A few examples include:

Have you heard of other interesting uses for temporary hangars? We’re all ears – let us know in the comments below.

For more information about temporary hangars, please contact us. We have plenty of experience behind us.